“ A journey is best measured in Friends rather than miles” 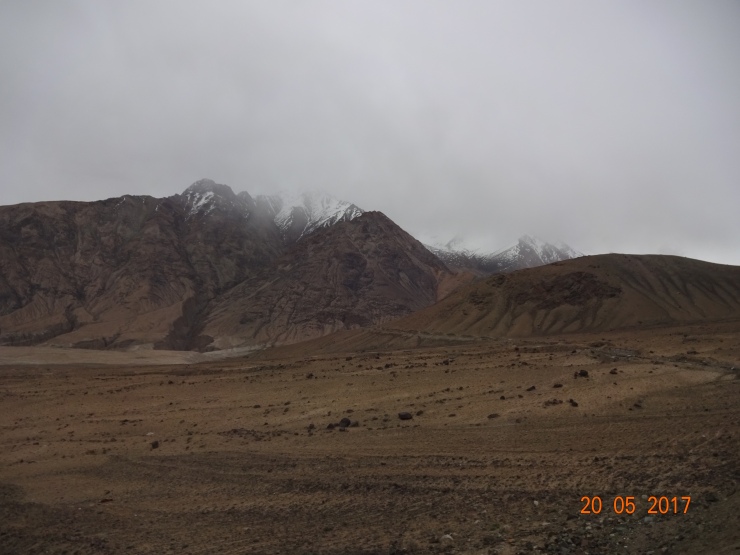 Historical Background : For nearly 900 years, from the middle of the 10th century, Ladakh was an independent kingdom, its ruling dynasties descending from the kings of old Tibet.The kingdom attained its greatest geographical extent and glory in the early 17th century under the famous king Singge Namgyal, whose domain extended across Spiti and western Tibet right up to the Mayum-la, beyond the sacred sites of Mount Kailash and Lake Mansarovar.

Gradually, perhaps partly due to the fact that it was politically stable, Ladakh became to be recognized as the best trade route between  Punjab and Central Asia

Geographical Introduction : Ladakh is a land abounding in awesome physical features set in an enormous and spectacular environment. Bounded by two of the world’s mightiest mountain ranges, the Karakoram in the north and the Great Himalaya in the south, it is traversed by two other parallel chains, the Ladakh Range and the Zanskar Range.

In geological terms, this is a young land, formed a few million years ago. Its basic contours uplifted by tectonic movements, have been modified over the millennia by the process of erosion due to wind and water, sculpted into the form that we see today.

Today a high-altitude desert, sheltered from the rain-bearing clouds of the Indian monsoon by the barrier of the Great Himalayas, Ladakh was once covered by an extensive lake system, the vestiges of which still exist on its south-east plateaux of Rupshu and Chushul, in the drainage basins or lakes of Tso–moriri, Tso-kar and Pangong-tso. The main source of water is however the winter snowfall.

Ladakh lies at altitudes ranging from about 9,000 ft (2,750 m) at Kargil to 25,170 ft (7,672m) at Saser Kangri, in the Karakoram Range. Summer temperatures rarely exceed 27degree C in the shade, while in winter they may at times plummet to minus 20 degree C even in Leh. Surprisingly though, the thin air makes the heat of the sun even more intense than at lower altitudes. It is said that only in Ladakh can a man sitting in the sun with his feet in the shade suffer from sunstroke and frostbite at the same time! 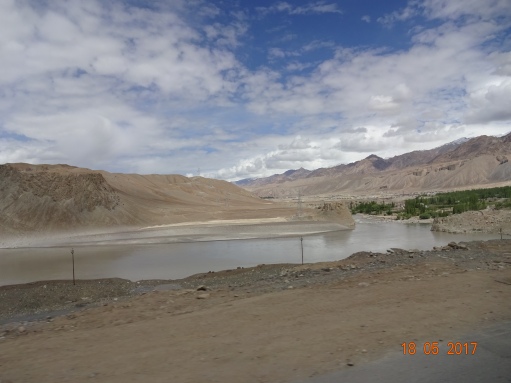 On the way to Alchi

The inhabitants of Ladakh are distinct from other parts of India. The faces and physique of Ladakhis, and the clothes they wear are more akin to those of Tibet and central Asia. In eastern and central Ladakh, today’s population seems to be mostly of Tibetan origin. Further west, in and around Kargil, there is much in the people’s appearance that suggests a mixed origin.The Ladakhi people are a hospitable, smiling, hardy lot, very friendly and open. Among the many social and cultural events of Ladakh, the annual festivals held in the Buddhist monasteries constitute the most important part of the region’s living heritage. The architecture of Ladakh contains Tibetan and Indian influences and reflects a deeply Buddhist approach. The Buddhist wheel, along with two dragons is a common feature on every Gompa.

“ Your Heart is free – have the courage to follow it”
Visiting Ladakh was in my bucket list for a long time so when a friend of mine suggested. I seized  the opportunity. Having scourged the net about ladakh and for the best available deal. we decided on a seven day – six night package although we were aware that the duration would not be sufficient for us to get  fully acclimatized, prior commencing our tour.We accordingly decided to go slow on the trip and spend the first two days in Leh but we were unable to get a package to suit our requirement and therefore went ahead for a customised package –  when we spotted Travel triangle– a travel portal who gave us details of 3 agents listed with them. We zeroed on Amazing India Routes. We booked the air tickets and finalised the tour itinerary. Another friend decided to join us at the eleventh hour which made us a group of four comprising three ladies and one gent. We began our preparations for the trip with a lot of excitement and  Soon the D-day arrived. We had booked an early morning(0400)direct flight from Mumbai to Leh .We were so excited that we reached the airport at 11 PM only to find  the check in counters closed and were to open only at  0200 hrs. We were however not bored and spent the waiting time chatting and soon it was time to board the aircraft. 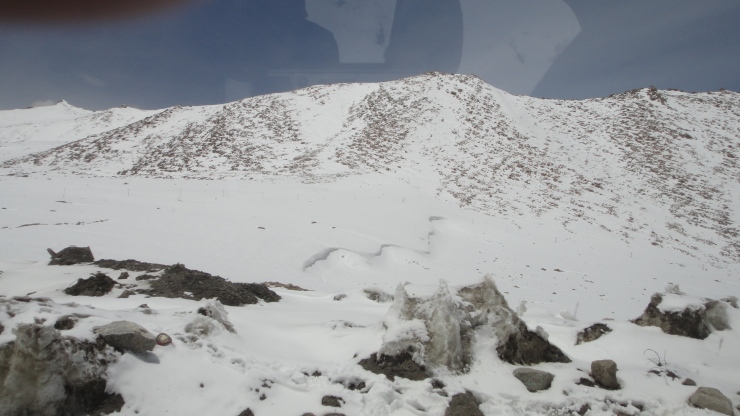 The view of Leh while landing was breathtaking.On board and also at the airport there were announcements of the dos and dont’s on your first day.We followed the instructions.I will mention all the instructions in my Tips for the trip section.

Our driver Rinzim was waiting for us at the airport.As the trip progressed we found the driver very friendly ,informative and very co-operative who constantly gave us tips on how to handle the climate of ladakh, he is  fluent both in Hindi and English.He has good knowledge about the flora and fauna of the place. We were booked in Hotel Kanishka in Leh.We got good comfortable rooms, after a refreshing cup of tea in the lounge we proceeded to our rooms. We could soon feel the difference in air and a bit of breathlessness and simple tasks like  changing was making us breathless.We remained in our rooms chatting and watching the television and came down only for our meals. We slept well which was good sign.However I would like to mention the cellular service providers here are only Airtel,Aircell and BSNL.Only post paid mobiles work here. 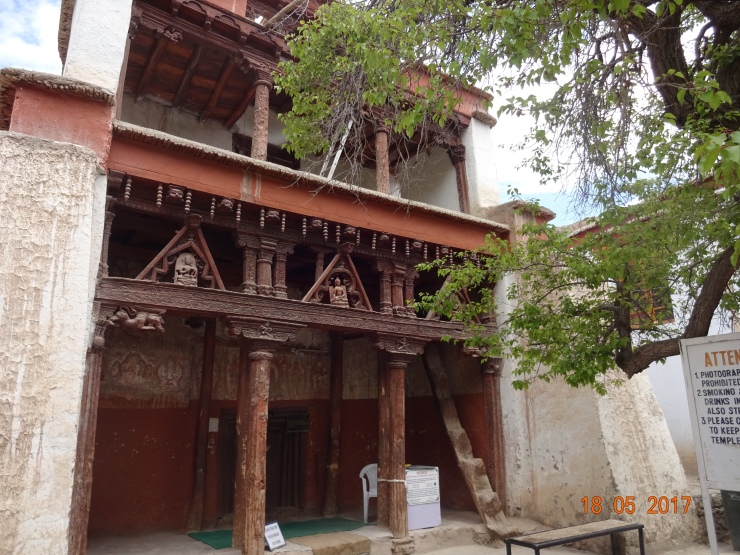 Our next stop was the famed Alchi Monastery in Alchi village about 70kms from  Leh city.The main attraction in the Alchi village is the Alchi monastery or Alchi Gompa situated on the banks of the river Indus.It is regarded as one of the most important Buddhist centres in Ladakh and also as the  monastic jewel of Ladakh.The Alchi Monastery dates back to thousand years and so one can see the Tibetan influence.There are five shrines inside the complex which has some splendid wall paintings.One of the walls features thousands of miniature sized pictures of Buddha.Three large sized images made of clay painted brightly are its focal attraction.The colourful bazaar outside selling curios,jewellery and artifacts  was very tempting we bought some as gift items for friends and family. It was around 2pm and we were hungry there were some restaurants in the complex but we decided to eat some local food in  Nimmo one of the villages.On our way back the restaurant the driver suggested was unfortunately closed so we went to the one that was open we ordered momos and thukpa(Tibetan noodle soup).The portions were large but the food passable but  the rates were pocket friendly.The tickets for Alchi Monastery is Rs 30 per person.Parking Rs 50

On the way was the Magnetic hill one that has mystified people for long and still continues to do so. It is a small stretch of road located about 30 kms from Leh towards Kargil and known as Magnetic Hill of Ladakh. On this particular part of the Srinagar-Leh highway, you would clearly see the road ahead going uphill. Yet if you turned off the engine and let your vehicle stand in neutral, it will slowly start moving and can go up to a speed of 20 kms per hour on its own We also tried Rinzim put the gears on neutral and we experienced the same.But Rimzim maintained that it is an optical illusion besides there are many folklores about this place.After this little experiment we proceeded to our next destination

Gurudwara Shri Pathar Sahib.  Situated 25 miles from Leh in ladakh region in Jammu and Kashmir , Gurudwara Pathar Sahib stands at the place where Guru Nanak, the founder of Sikh religion and the first guru, is believed to have vanquished a demon.It is maintained by the army.There is a langar everyday since we already had lunch we tried the chota langar ie tea and snacks we had hot sweet tea and mathris.I would advice people to have the langar here as your lunch.It was raining so we had to wait for some time.

Our last stop  was Hall of Fame The Hall of Fame is a glorious museum constructed by the Indian Army. It is worth a visit for every citizen. There is a shop selling shawls and gift items my friend bought a yak wool shawl.The proceeds goes to the maintenance of the place A nominal ticket of Rs 10 per person for Indian tourists and parking Rs 50.There are clean washrooms in the parking lot.You can see the memorabilia, eminent defense personalities with biographies, images and weapons used during the Kargil and other key strategic battles fought in Ladakh. And belongings of the enemy soldiers found at war site. All the martyr and the gallantry awards…
“Here’s something that you will be proud of our defense personnel who sacrificed themselves so that we could live in peace.”

On the Way to Khardungla

We started around 8 in the morning, our first halt was in the market for  small oxygen cylinder( we took that as a precautionary measure) you can hire it for Rs 500 if unused you get a refund of 400 bucks.After that we resumed our journey  for Nubra Valley via Khardungla Pass the highest motorable road 18390 ft.It is about 39 kms from Leh.Nubra Valley is 140 kms and it takes 5-6 hours.

“Life begins at the end of your comfort zone

Leave your fear behind”

My heart was beating with excitement and I  was on a high, the place which I  always dreamt to be was soon going to be a reality “The khardungla Pass” Decked in a coat of thick snow all year long, Khardungla mesmerizes you with its  natural beauty and one gets a  splendid views of the snow capped Himalayas  and attractive views of the valleys. In addition, Tibetan prayer flags add numerous colours to the scenic beauty.,On the way we saw literally sheets of ice on both sides of the roads our excitement increased when we spotted icicles and inspite of subzero temperature and the piercing cold wind that didn’t deter us from taking photographs alongside sheets of ice and holding icicles in our hands.Rinzim told us not to stay more than 10 minutes we hurried back into the car.The roads are not paved and with the frozen mix of ice and dirt for a road it makes one slippery and narrow trail with very deep valleys right next to you. Usually there are potential long travel delays due to traffic congestion on narrow one-lane sections, washouts, landslides and road accidents.Maintained by the Border Roads Organisation, the pass is strategically important to India as it is used to carry supplies to the Siachen Glacier.Due to the proximity of the Pakistani and Chinese borders, army truck convoys are a regulary seen and is the lifeline of the region. After an hour ,and half we reached khardungla pass encountering a number of sharp hairpin bends. The road is primarily loose rock, dirt, and usually covered in snow We had to halt for for about 20 minutes for an army envoy to pass.The Pass remains open May- October,depending on the weather.It was a very bumpy ride and all the bones in our body was shaken up.Diamox helped us and we did not suffer from  Altitude sickness.The thin Air did cause certain amount of breathlessness but we didn’t need the use of the Oxygen cylinder. 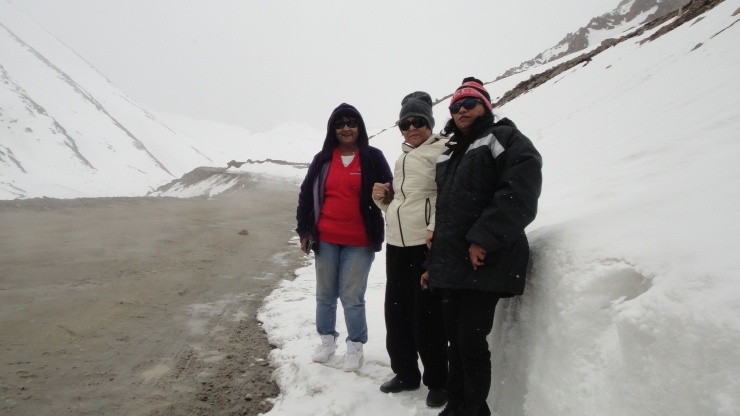 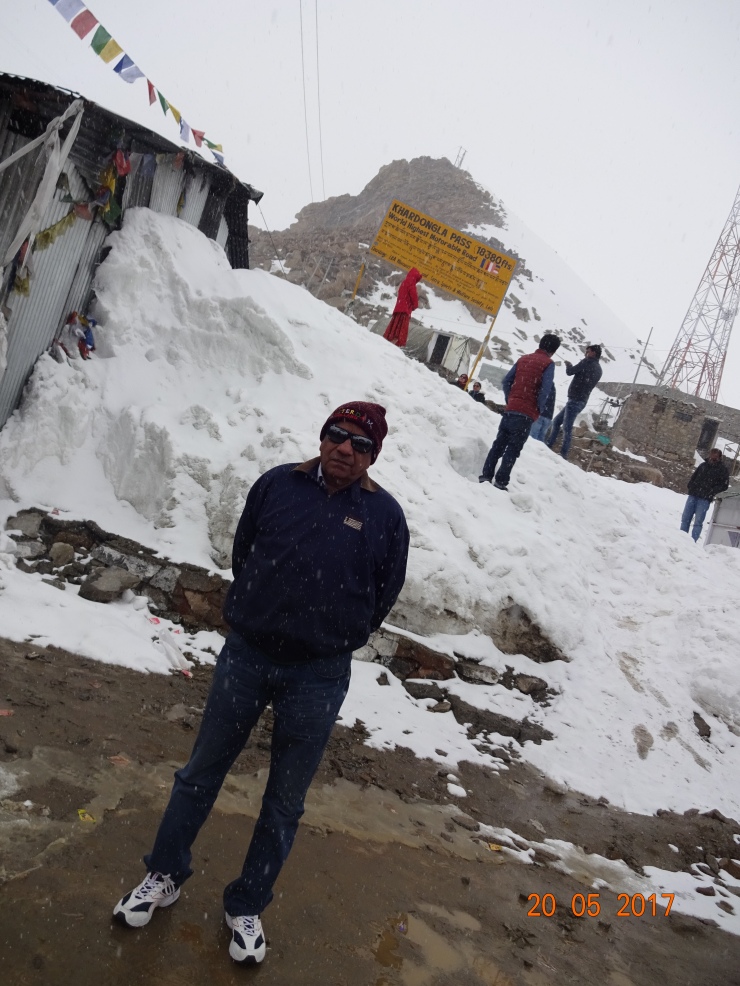 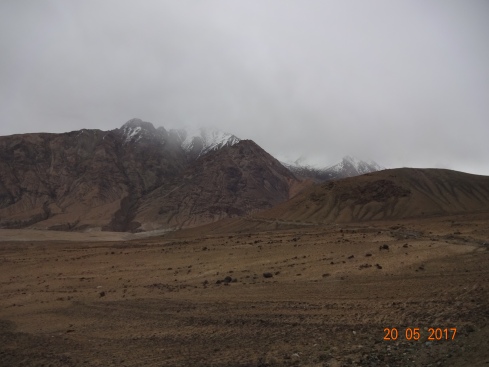 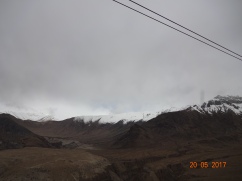 On the way to Nubra Valley

On the way to Nubra Valley

To be continued in Ladakh Diaries part 2